Residents encouraged to squash food waste as Halloween draws near

Halloween is less than a week away and with an estimated 22 million pumpkins - worth £32 million - expected to be wasted this year, West Oxfordshire District Council is inviting residents to make the most of this particularly versatile autumn fruit.

According to sustainability charity, Hubbub, 39.9 million pumpkins are expected to be purchased in the UK this year but over a half will be thrown away following the Halloween festivities. Based on these figures, anything up to 35,000 pumpkins in West Oxfordshire could end up discarded even though with a little preparation they could have provided a cheap and nutritious meal.

To help combat food waste the District Council is encouraging householders to cook and consume the edible bits of their pumpkins rather than consigning them to the compost bin or food waste caddy - or worse, in environmental terms, the refuse bin.

Councillor Lidia Arciszewska, Cabinet Member for Environment at West Oxfordshire District Council said: “As Halloween approaches, we want more of the pumpkins traditionally used for carving to be eaten rather than thrown away. With around a third of global greenhouse gas emissions which cause climate change linked to food production and consumption, we need to take urgent action if we are to hit our carbon reduction targets. Rethinking our relationship with the foods we eat, and crucially those we don’t which end up wasted, is an important step in achieving this.

“So much of a pumpkin can be eaten from the seeds, innards, skin and flesh and there are plenty of recipes out there to help people, whatever their cooking ability or the time they have available, to get creative in the kitchen, from simple but delicious soups to seasonal dishes that require a bit more time and effort. Websites such as www.lovefoodhatewaste.com also have plenty of tips about how to store foods successfully so even less gets wasted.”

Find out more about Hubbub’s #EatYourPumpkin campaign, including over 40 sweet and savoury seasonal pumpkin recipes, at: www.hubbub.org.uk/eat-your-pumpkin.

Residents preferring to recycle their Jack O'lanterns at the kerbside should reduce larger pumpkins so that they fit inside the food waste caddy, removing any tea lights and wax first. Householders who need a caddy can collect one from the District Council’s Town Centre Shop in Welch Way, Witney or by ordering online at www.westoxon.gov.uk. 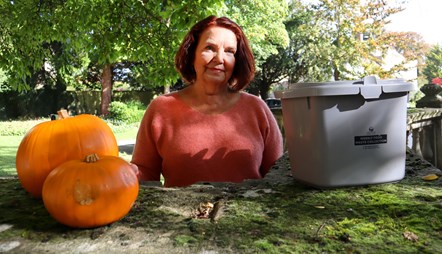