The Great British Spring Clean - Keep Britain Tidy's flagship event - gets underway next week (25 March to 10 April) and residents in West Oxfordshire are invited to join the army of volunteers from across the country who will be cleaning up around where they live, to protect the environment and rid streets of litter.

This year, members of the public, community groups and schools are asked to pledge online as to the number of litter bags they will fill during the fortnight as part of the #BigBagChallenge.

In support, West Oxfordshire District Council will pick up bags of litter collected by volunteers who sign up to take part.

Councillor Norman MacRae, Cabinet Member for Environment at West Oxfordshire District Council, said: “We know the problem of litter is one issue that residents are particularly passionate about. As well as polluting our streets, parks and open green spaces, litter harms wildlife and costs local authorities and ultimately tax payers a staggering £1 billion a year to clean up - money which could be better spent elsewhere, given that most litter is totally avoidable.

Each year, hundreds of thousands of people up and down the country come together to show how much they care for their local neighbourhood and the environment by taking part in this annual event. Whether you pick up ten bags of litter or only one it all makes a huge difference in keeping our district clean, and, in appreciation of the great work which is being done by West Oxfordshire communities, the Council will once again be collecting bags of litter from anyone who needs us to.”

Keep Britain Tidy estimates that £30 for every household in the country is spent on clearing the nation’s litter problem.

Unless collected most litter will last in the environment for many decades and in the case of some of the most frequently littered items, such as plastic drinks bottles and drink cans, this could amount to centuries.

The District Council is unable to loan out litter grabbers and bag hoops but is currently working with the district’s town and parish councils to set up local hubs where members of the public can go to borrow litter picking equipment in the future.

Anyone wishing to take part in this year’s #BigBagChallenge can pledge online at: https://www.keepbritaintidy.org/get-involved/support-our-campaigns/great-british-spring-clean/pledge-to-pick. Guidance on how to litter pick safely can also be found on the website. 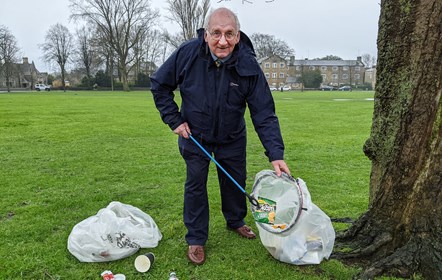