Teenagers have their say on developing community projects

Youngsters from across the District gathered to develop potential new community projects as part of a special exercise, Have Your Say.

Eight teams of teenagers were handed an imaginary £30,000 and told to devise their projects helped by a range of partners including West Oxfordshire District Council, Thames Valley Police, Activate Learning, the Rotary Club and mental health charity Mind.

They then had to present their ideas to a panel of judges including Mayor of Carterton Cllr Michele Mead and Cllr Norman MacRae, Cabinet Member for Community Safety at West Oxfordshire District Council, with the winner presented with a £100 cheque.

Carterton Community College wanted to set up an after school club which will feature visits from experts such as the police or charitable organisations who would be able to help with specific issues such as drugs being experienced by young people.

Team member Kieran Everett, 13, said: “We know that young people have lots of problems and need help. The organisations we have met today seem to think this is a really great idea.”

Alfie McDonough, 13, from Bartholomew School, Eynsham, was part of his school’s team which was setting up an organisation providing dogs for people with mental health issues.

He said: “We have had a good discussion and believe this project would be great for people with mental health problems or who are feeling lonely.”

Cllr MacRae said: “We have been hugely impressed with the ideas and application of these young people and I am sure their hard work will be brought to fruition in schools and the community in the near future.”

Chair of the judges Brian Ford, a member of the Rotary Club, added: “This is an excellent example of volunteer groups working with local government and the Police to provide an opportunity for young people to identify how life in their communities can be improved.” 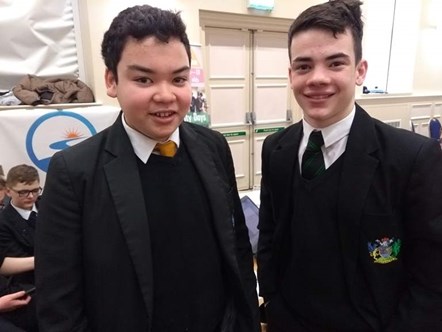 Teenagers have their say