Keith Butler, West Oxfordshire’s Electoral Returning Officer received a standing ovation at the last full Council meeting and was thanked for his outstanding service to the District.

He joined the Council in 1996 and since then has declared 550 election results and overseen 31 major elections; including three high profile Parliamentary elections (2005, 2010, 2015) when David Cameron stood as one of the candidates.

Alongside Keith’s election duties, he managed Council democratic services including ensuring meetings were properly resourced and the correct protocols and procedures were followed. He provided support, advice and training to District Councillors and also supported Town and Parish Councils and their Clerks.

Keith Butler said, “I have loved my time at West Oxfordshire and my thanks go to everyone I have worked with. I have been touched by their many kind words and comments over the last few weeks. Although I will miss the Council and the people greatly, I am also looking forward to spending more time with my family and pursuing my many interests.”

Giles Hughes, Chief Executive of West Oxfordshire District Council said, “Keith is an outstanding and hardworking officer, often going above and beyond the call of duty. I have thoroughly enjoyed working with him and his huge experience and sound judgement will be sorely missed by us all.”

Outside of West Oxfordshire, Keith is a highly respected member of the Association of Electoral Administrators (AEA) and recently he was recognised nationally with an award for his dedication and service.

Tributes have flowed in for Keith from councillors across all the political parties. Below are some of the messages sent to him:

Cllr Michelle Mead, Council Leader “You sit patiently in our meetings very calmly keeping us in check and for this we are eternally grateful. All members rely on your expertise and will miss having you around.”

Cllr Andy Graham “You are an embodiment of what local government is all about – integrity, honesty, objectivity and going that extra mile supporting us councillors and most importantly with the bigger picture in mind, our residents. A big, big thank you.”

Cllr Luci Ashbourne “I hope your heart is soaring with pride – you’ve made such a difference to so many people over the years, being the go-to person for wisdom and support for councillors, officers and candidates alike. 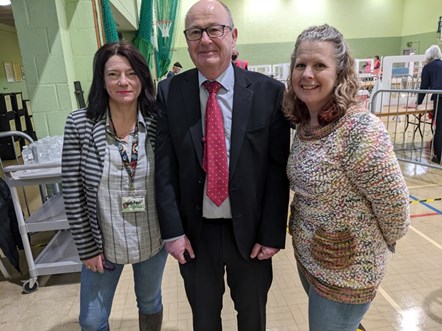