Cllr Martin McBride, Chairman of the Council and Environment Committee member said, “I arranged for this activity to involve the children in beautifying their environment and contributing to taking care of the bees, beetles and butterflies that will benefit the flowers when they grow. The children were a fantastic help.”

36 pupils were recognised by their classmates for being a ‘Kind Person’. As a thank you to them for being role models, they were invited to take part in the ‘Wildflower Planting’ on Trefoil Way, Shilton Park.

A wildflower seed mix was used that contained a mix of different native flowering species such as oxeye daisies, red campion, cowslip and yellow rattle, which over time will establish to provide new areas for pollinators to forage for nectar and pollen. The aim is to provide ‘stopping places‘ for pollinators such as bees & beetles.

Led by Rachel Crookes, Biodiversity & Countryside Land Management Officer​ WODC, students from across the school’s age groups lined up to spread seed across the newly rotovated areas on Trefoil Way, first casting it across the soil and then pressing the seeds in to ensure the seeds had come into firm contact. Older pupils also helped put up a sign marking out the new area and watering the seeds.

Mrs Marie Wargent, Deputy Headteacher St John the Evangelist C of E Primary School said, “Although the results will not be immediate but will take several years to become really established; overtime, the children will have the chance to see the wildflowers flourish and know they have had a positive impact on their local environment.”

This wildflower area is just one of over a hectare being created across WODC owned estates in Witney, Carterton and Chipping Norton. These areas are part of our new Land Management Plans for the estates as part of the district council’s response to the ecological emergency– you can view these at https://www.westoxon.gov.uk/environment/climate-action/enhancing-our-natural-capital/. 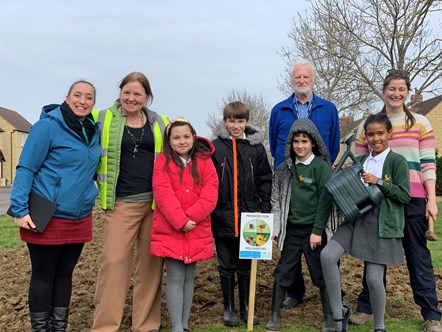 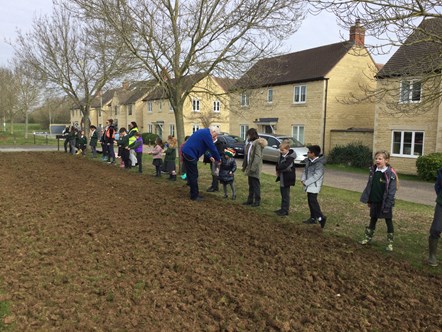 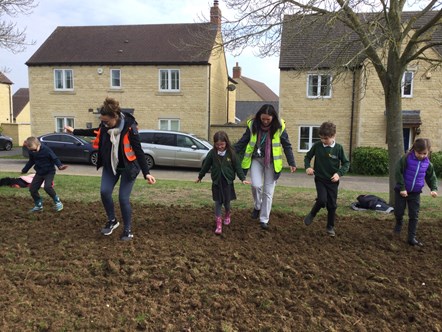 Stomping on the seeds