Council calls on people across the district to unite in understanding and fighting back against fly-tipping.

A major campaign to raise awareness of the problem of fly tipping is being launched in West Oxfordshire today (Tuesday).

Nationally, fly tipping is on the rise and this is reflected in the district with council operatives regularly called to investigate and clear unsightly rubbish that has been dumped illegally, often on farmland or roadsides.

Created by the Hertfordshire Fly Tipping Group, the SCRAP Campaign has been run successfully in other areas of the country using know-how and resources sourced from many local authorities.

The Council’s aim is to raise awareness of the issue and inform residents and businesses about the law and their obligations around fly-tipping.

Over the next few weeks, the district will be running an online campaign highlighting key information such as how to check for a waste carrier’s licence and information on disposing different types of waste.

Cllr Norman MacRae, Cabinet Member for the Environment at West Oxfordshire District Council, said: “We all have a responsibility for our local environment and protecting it from the harm caused by fly tipping. This campaign enforces the message that no corners should be cut when it comes to disposing of waste responsibly and that anyone caught doing so can expect high penalties if successfully prosecuted.” 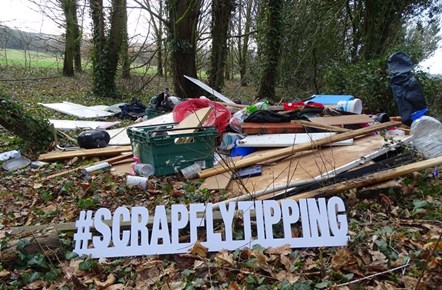