The app has been rolled out across West Oxfordshire to encourage shoppers and visitors back to the high street, after the uncertainty of the last 18 months due to the Covid-19 pandemic.

Businesses across West Oxfordshire have signed up with a range of offers such as discounts on wine, beauty treatments, free coffees, meals out, electrical goods, books and even discounts on sports club membership.

Cllr Suzi Coul, Cabinet Member for Finance, said: “I am pleased that the app has been embraced by residents and businesses alike. Local businesses have really got behind it and uploaded some fantastic offers for people to enjoy.

“The app also has a number of interactive trails, highlighting some of the hidden treasures and attractions in the area, providing ideas for great days out during the summer holidays.

“It’s been great to see that so many local people are redeeming the offers and collecting their loyalty stamps. In doing so they are supporting their local economy and potentially reducing their carbon footprint by shopping locally.”

The app also provides trails that give users the opportunity to explore West Oxfordshire in a new way with routes like the Downton Abbey Trail and Witney Historic Sites trail giving an extra dimension to days out.

The app is available on Google Play and the App Store. It forms part of the Council’s work to build a vibrant economy, create healthy towns and villages and support strong local communities.

Funding for the project will be coming from the European Regional Development Fund (ERDF) as part of its Welcome Back Fund.

LoyalFree is a mobile phone app which replaces the act of stamping a physical loyalty card. Customers collect points until they have enough to claim a reward. The LoyalFree app is available on Apple (iPhone and iPad) and Android devices that have cameras. If GPS is enabled on the user’s device, the app will automatically show offers from the location of the user.

Users download the mobile app to find nearby deals. At the point of sale they scan the merchant’s QR code and receive their points or discount instantly.

When enough points have been collected users are notified within the app. The next time they scan the retailer's QR code they receive the item and start collecting points once more. 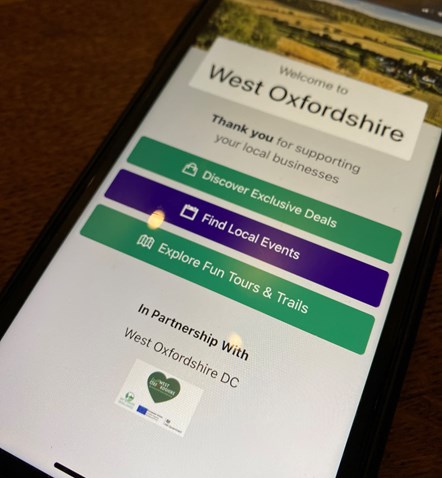