West Oxfordshire District Council has taken delivery of its first all-electric street sweeper as part of its commitment for all council activities and operations to become carbon neutral by 2030 as it seeks to tackle the climate emergency.

With no polluting exhaust emissions, the new compact Bucher CityCat VS20e joins the Council’s fleet to replace a diesel sweeper that had reached the end of its working life.

The acquisition comes after the District Council purchased its very first battery electric car, a Renault Zoe, last year. The sweeper will now be used by the Council’s contractor, Ubico, to fulfil its waste and street cleansing contract.

Councillor Norman MacRae, Cabinet Member for Environment at West Oxfordshire District Council, said: “While the Council’s aspiration to transition its waste and recycling fleet to alternative fuels such as electric - or more likely hydrogen - is still some way off, this latest addition is another step in the right direction.”

“With the capability to sweep for up to 6 hours without the need to stop and charge, the sweeper can be used for a full day’s shift before returning to the depot. During a typical 6-hour sweep cycle 55kg of CO2 will be saved when compared to an equivalent diesel sweeper.

“In addition to the significant environmental benefits we anticipate reduced fuel and maintenance costs, and the fact that it can operate in near-silence, makes it ideal to use in residential areas early in the morning.”

Ian Bourton, Head of Fleet Operations at Ubico, said: “This is another great example of how Ubico is working with West Oxfordshire District Council and our other partner councils in providing alternative fuelled vehicles and vehicles equipped with the latest technology to improve the air quality and help partners achieve their net zero carbon targets.”

The new sweeper will now be used throughout the district to remove debris and weeds from areas including smaller housing estates and roads, pathways, pedestrian areas and car parks falling under the Council’s ownership. 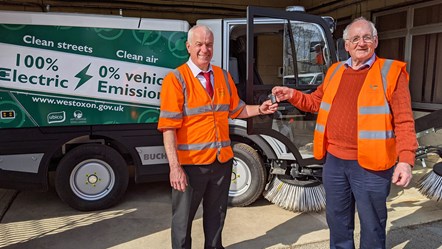