Drivers of electric vehicles will soon be able to plug in and charge at five West Oxfordshire District Council owned car parks as part of a £5.4m funded project to roll out electric vehicle charging points (EVCP) across Oxfordshire.

The chargers are being delivered under the countywide Park and Charge Oxfordshire project to help motorists make the switch to cleaner, greener driving by providing more places to charge whilst ‘on-the-go’ and giving local residents, with no off-street parking, the ability to park for free overnight and charge their electric vehicles at a competitive price.

Developing the infrastructure to support electric vehicles is just one objective outlined in the Council’s Climate Change Strategy, which includes decarbonising transport in the district.

Councillor David Harvey, Cabinet Member for Climate Change at West Oxfordshire District Council, said: “Five of our council owned car parks are in the process of having the new charging points installed and we are delighted that the first units, at Woodford Way will be live very shortly, with the remaining sites coming online very soon after.  Getting to this point has been very much a collaborative effort between the District Council and the Park and Charge Oxfordshire team at Oxfordshire County Council, as well as other delivery partners, and represents a key milestone in our plans to decarbonise travel in the district.

“Take up of EVs is increasing at an ever rapid rate and adoption of ultra-low emission vehicles in Oxfordshire is particularly high compared to the UK average, so it’s crucial that we have the infrastructure in place to support those drivers who have already made the switch to electric while encouraging those that are thinking about making the move, to do so.”

The new chargers have been designed and produced by local Bicester-based company - EZ Charge - who will operate the chargers going forward.

Councillor Pete Sudbury, Oxfordshire County Council’s Cabinet Member for Climate Change and Environment, said: “Many councillors have already had residents who don't have off-street parking asking about charging EVs, and we at the county council know we need to accelerate different solutions to that problem. Park and Charge is a key part of the Oxfordshire EV strategy, helping people to move away from using diesel and petrol vehicles.”

The four other Council owned car parks, which are due to come online within the next couple of weeks, are: Back Lane, (Eynsham), New Street (Chipping Norton), Black Bourton Road (Carterton) and Hensington Road (Woodstock).

Each car park will offer both ‘tethered’ and ‘socketed’ chargers, which means all EV drivers can use them, whether they have Type 1 or Type 2 connections.

The Park and Charge Oxfordshire project has attracted £5.4m of funding, with £4.1m being funded through the Office for Zero Emission Vehicles via Innovate UK and the On-Street Residential Chargepoint Scheme. The remaining investment has come from commercial partners Zeta Specialist Lighting and [ui!] UK (Urban Integrated).

The District Council is already in the early discussions to identify more rural locations in the district where EVCPs could potentially be installed to offer a wider geographic spread in due course.

In a further move to increase the infrastructure available to EV drivers, the District Council is working with its own provider, EB Charging, on a separate project which should see 4 x 7kW charging units installed in the Council’s Burford car park, offering 8 charging bays, under the first phase of planned works. A grant application will now be submitted seeking government funding with the Council taking a final decision on the installation in late spring. 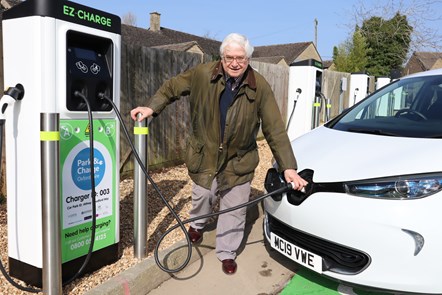 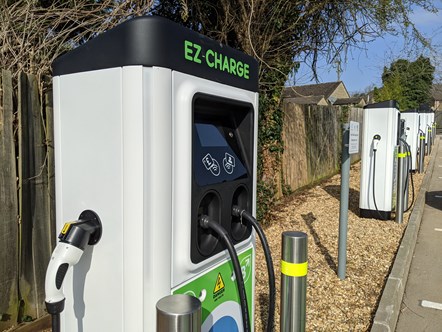