Pupils Nicole Harris, Lexie Bosher and Millie Freer took top prize in the competition, which invited young people to share their views on the district’s climate emergency, represented through either a drawing or some other form of creative media.

Members of the District Council’s Climate Action Working Group received entries from school-aged children from across the district but it was Millie’s illustration (entitled ‘Wellbeing’) and Lexie and Nicole’s joint entry (‘The Climate Change Song’) which most impressed the judges.

However, Covid restrictions meant that the official handover of the prizes had to be postponed.

Joining the winners this week, Councillor David Harvey, Cabinet Member for Climate Change at West Oxfordshire District Council, said: “Our congratulations go to Nicole, Lexie and Millie and they should be very proud of what they have achieved.  Their entries were of such a high calibre.  What really shone through for me was the depth of understanding that each showed around the climate emergency and, in particular, how it will affect the younger generations in the future.

“Narrowing the winners down proved a very difficult task and we would like to thank everyone that took part.”

Dr Joanna Willis, PSHE teacher at Wood Green School, said: “Our students were keen to enter the competition after a pupil read about it in a local paper.  While climate change is addressed in the curriculum, the competition offered us an opportunity to engage with pupils and encourage further conversations about this important topic.

“While the girls heard the news back in the autumn they had won, it’s only now that they’ve been able to plant their trees after Covid restrictions caused a number of delays. We are thrilled to finally be able to fully celebrate their success today.”

Nicole and Lexie’s apple tree has now been planted in the school garden; their wish for it to act as a lasting reminder to their peers about the climate crisis.  They hope that in years to come their own children and grandchildren will be able to visit the tree they planted.

Millie donated her tree to the Deer Park Wood orchard - a favourite place where she often exercises.

West Oxfordshire District Council’s Climate Change Strategy was adopted in February 2021 and outlines how it will meet its priorities for climate action in the district.  Details can be found at: www.westoxon.gov.uk/environment/climate-action/climate-change-strategy/

Residents wanting to learn more about what is being done can sign up to the Council’s quarterly bulletin at: www.westoxon.gov.uk/environment/climate-action/climate-action-bulletin/ 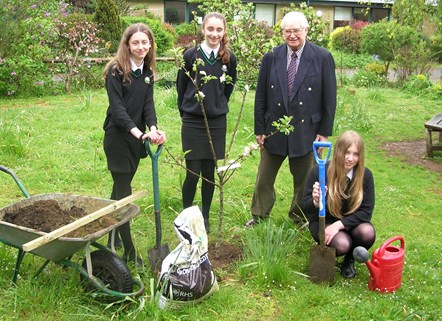